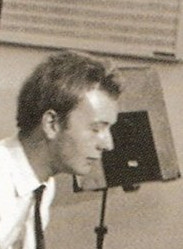 Here we are in our first regular show in 2016. We all heard the bad news – David Bowie passed away and we pay respects today. A less covered exit also happened recently – Brett Smiley, an American boy in the late 1970s who tried to become a glam rock star a-la Bowie, but failed. Still, he left a great album which only came out about ten years ago. Carson Van Osten also passed away. He is from Nazz, a legendary rock band formed by Todd Rundgren in the 60s.

But we also check out some new music. 76yo blues musician Ironing Board Sam has a new record, we introduce Milk Lines from Toronto. We also check out the new Sacri Cuori albums. Kevin Gordon, singer-songwriter from Louisiana is also back with the first new record in three years.

Singer singwriters today… some of the greatest ever. Dan Stuart, founding member of the Green On Red is finally back with with his second ever solo album, the first since his excellent debut Can O’Worms in 1995. The new album is called The Deliverance of Marlowe Billings. Italian band Sacri Cuori backs him up for this effort. Then we have Patti Smith who also has a new record out called Banga. Grant Hart is preparing a new solo double album called The Argument based on Milton’s poem Paradise Lost. The album is still not out, but two songs from it came out on a 45. Jon Dee Graham was recently in Cleveland, at Beachland Tavern and he’s in our Live in Cleveland segment. He also has a new album out Garage Sale which I picked at the show. And then there’s the new album from the guy on the picture. We say goodbye to Scott McKenzie, who sadly died recently. Finally, we have an exclusive new tune from a Zagreb band Vex And The Voxtones, who will participate on the upcoming tribute to The Records.

Patti Smith – Mosaic;
Sacri Cuori – El Gone;
Dan Stuart – What Are You Laughing About;
Dan Stuart – Waterfall;
Grant Hart – So Far From Heaven;
Nova Mob – Space Jazz;
Scott McKenzie – No, No, No, No, No;
Scott Mckenzie – What’s The Difference;
Jon Dee Graham – Sleep Enough To Dream (Live In CLE);
Jon Dee Graham – Just Like That;
The Rubinoos – Leave My Heart Alone;
Vex and the Voxtones – Not So Much The Time;
The Records – Not So Much Time;
Spitballs – Boris The Spider;
The Flatlanders – Number Sixteen.