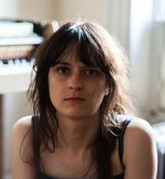 Today we have a brand new track from The Flesh Eaters, who reformed in their most notorious line up, featuring Chris D, Steve Berlin, DJ Bonebrake, John Doe, Bill Bateman and Dave Alvin. And it’s a cover of a lesser known Sonics tune! We also have the new tune from Emma DeCorsey of I Am The Polish Army from her new cassette Dream. Clara Engel from Toronto in Canada also has a new album A Shore Far From Any Prison. Clara will be playing live in Cleveland on December 7th at Euclid Tavern and on December 8th at The Whiskey Bar. Emma will be playing at Blue Arrow Records on November 10th at 3pm. Both of them are coming to Cleveland through a booking production of The Little Lighthouse. So that’s something new I’m doing and it would be appreciated if you all come and support the effort. Talking about Blue Arrow Records, new Jonathan Richman record is coming out today on that label and it’s called Sa. It features Jerry Harrison on keyboards, among others. We also introduce Maiorano from Berlin Germany, Michael Head from Liverpool, England and an older record that came on Ill In The Head Records by a Croatian band Gipps. On Numero, there is also a nice reissue compilation entitled Basement Beehive: The Girl Group Underground. We check it all out today.