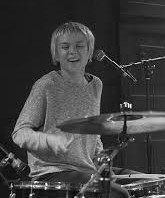 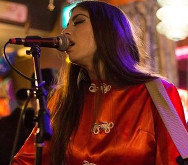 We have a lot of new music from our heroes today. Matthew Sweet has a new album and so does Holly Golightly with her Brokeoffs. Krist Novoselic returned as a bass player and accordionist of a new band called Giants In The Trees. Jillian Raye, however, is the front woman of the band. We also introduce Chris Price from LA. Also from LA, we have Groovy Movies. Shirley Davis from Madrid, Spain and Bottle Kids from Chicago, IL are also here for the first time. We also pay respect to Ralph Carney, instrumentalist from Akron OH, who passed away back in December. We know him well from his work with Tom Waits on Rain Dogs.

Glenn Branca – Bad Smells;
Giants In The Trees – Sasquatch;
Holly Golightly & The Brokeoffs – Jinny Mule;
Kelly Willis – Don’t Step Away;
Tommy Keene – I Belong To You;
Matthew Sweet – I Belong to You;
Chris Price – Discount Love;
Ford Madox Ford – How Does Your Horn Sound Today;
Groovy Uncle – The moon And Back;
Heather Lynne Horton – Did You Feel That;
Shirley Davis & The SilverBacks – Smile;
The Rent Party – Tango Till They’re Sore (Live in CLE);
Tom Waits – Jockey Full Of Bourbon;
Tom Waits – Union Square;
Things To Come – Come Alive;
The Well Wishers – There Goes My Gun;
The Bottle Kids – She Put The Rock In Roll;
Groovy Movies – Don’t Take Her Love Away.

Doug Gillard has a new record out called Parade On and we check out the new single. His old band-mate from Death of Samantha, John Petkovic and his new band with J Mascis, Sweet Apple, finally have their long-awaited second record out, and we check out one track from it. Holly Golightly and her Brokeoffs are back with another LP, All Her Fault. Luther Dickinson of The North Mississippi Allstars also has a new record called Rock’n’roll Blues. Dex Romweber from Flat Duo Jets returned with Images 13 plus there’s a recent reissue of the back catalogue on Third Man Records. We introduce three new names. Little Murders from Australia and Lydia Loveless from Columbus. Muck and The Mires come from Boston.

I will be playing a DJ set at Blue Arrow Records on Sunday at 5pm, just before the Alejandro Escovedo show at The Beachland Ballroom. Come join us, Alejandro will be there too. See you there.

Several new things today… John Wesley Coleman III has yet another record out this year, so when you add it all up together, it’s his forth this year: two solo, one duet and one with The Golden Boys (we reviewed it last week). Then we have a new band here at the Little Lighthouse, Kriz crvene fuxe from Zagreb, although the news comes to us that the band has already ceased to exists in the meantime. Julie Doiron, who used to be in Eric’s Trip is back with the new solo album. Talking about grunge, Soundgarden also has a new record. And finally, Holly Golighthly has another record with The Brokeoffs entitled Sunday Roll Me Over. We also pay a special homage in this show to Sandy Denny, who has a four CD box set filled with demos and other rarities.

The first part of the show is filled with crazy garage rockers. We have Thee Exciters and Johnny Throttle from England, Dan Sartain from Alabama and we round things up with the French duet The Magnetix with a segment from their live show this Sunday in Cleveland. Then we turn to veterans. Rich Hopkins and The Luminarios are here with a new double album. One cd contains a set of truly exceptional new songs and the other cd is ambiental in nature. Wedding Present are also back with the new record and so is Holly Golightly. We also pick one song by Vince Gill from the new tribute record to one of my favorite writers Mark Twain.

Today we have two new records. Legendary Fleshtones have a new album called Brooklyn Sound Solutions and they are also playing tonight in Cleveland at my favorite club Beachland. Holly Golightly is also back with another Brokeoffs release called No Help Coming. Last week we introduced Middle Brother, and today we continue listening to their self-titled record with a tune that features Nashville singer-songwriter Johnny Corndawg. He’s a new name at the Little Lighthouse, so we also check out one of his own tunes. Other than that, you may enjoy some glam hits and sixties straight-in-the-gut rock tunes from our today’s playlist.

Today we feature no less than three new truly exceptional records – one for Memphis musician Harlan T. Bobo, other for Holly Golightly and finally – Sweet Apple LP is out. This week in April might have brought three best records of 2010! Harlan’s third record is entitle Sucker. Not only it’s on par with his previous two records, but it also very well may be his best one yet. Diverse piece and a modern classic. Holly Golightly is again here with her Brokeoffs and it very well might be the hight of this duet’s career. Sweet Apple’s new album Love and Desperation is an instant hit record, lots of hooks and humor, but also some unexpected lyrical depths. But, let’s not forget to dedicate today’s show to Malcolm McLaren – legendary manager of Sex Pistols and a rock’n’roll maverick who died on April 8 this year.

After two shows when we reviewed some of the older “material”, in this show we have a chance to hear some of the hottest new releases of the current moment. Â Gentleman Jesse from Atlanta, GA and Judge Bone from Finland rock the (Light)house hard for the first time. Brimstone Howl, exciting new band from Nebraska (of all places) has a new album called We Come And Peace. They’ve been around for awhile, but we have them at this show for the first time (mark the calendars!). Eagles of Death Metal have a brand new album called Heart On and while it’s not surpassing the previous one, it’s still very exciting. Lucinda Williams has a new record called Little Honey and it’s probably the most electrified LP she ever recorded. And Little Lighthouse appreciates electricity more than anything else. On the other hand, Holly Golightly has gone acoustic on her new album with The Brokeoffs and that’s cool with us too. And, last but not the least – The Replacements put out the final four of their re-issues, fully equipped with cool bonus track, three of which we sample today.

Eagles of Death Metal – Whorehoppin (Shit, Goddamn);
Eagles Of Death Metal – How Can A Man With So Many Friends Feel So Alone;
Gentleman Jesse and His Men – The Rest of My Days;
Endless Boogie – Gimme The Awesome;
Brimstone Howl – Damned to Judge;
Brimstone Howl – Easy to Dream;
The Greenhornes and Holly Golightly – There Is an End;
Holly Golightly & The Brokeoffs – Slow Road;
Lucinda Williams – Little Rock Star;
Hedwig And The Angry Inch – Midnight Radio;
Cobra Verde – Home In The Highrise;
The Replacements – Nowhere Is My Home;
The Replacements – Photo;
The Replacements – Ought To Get Love;
Judge Bone – 15.000 Heads;
Mona Lisa Overdrive – Never Fallen;
The Drones – The Minotaur.