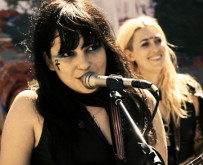 David Nance who made a big splash with a series of very interesting Internet projects and a masterpiece album entitled Do The Negative Boogie is back with the new record which he calls Peaced and Slightly Pulverized. Handsome Jack, over in Buffalo NY is also back with the new album and so is Bim Thomas with Obnox. Electric Six have a new record and so do Death Valley Girls. Matthew Houck leads Phosphorescent to the new release as well. We also introduce the one-man band for Justin Sullivan of Flat Worms, which he calls Night Shop.

Jim Lauderdale – Violet;
Handsome Jack – Getting Stronger;
Obnox – I Hate Everything;
King Khan – Live in CLE;
David Nance – When I Saw You Last Night;
David Nance Group – Stalled Out;
Texxcoco – No Beach;
Thee Dagger Debs – Without You;
Death Valley Girls – Wear Black;
Electric Six – Bride of the Devil;
Electric Six – One;
The Fleshtones – R-I-G-H-T-S;
The Second Time – Listen To The Music;
Phosphorescent – Around The Horn;
Night Shop – The One I Love;
Boz Scaggs – Rock And Stick.

Today we introduce Bully, a new band from Nashville, that doesn’t sound like a Nashville band, lead by Alicia Bognano on vocals. Then we check out the Canadian duet The Pack A.D. who are back with the new record. Lydia Loveless reissued her old singles into a compilation album and we sample that today. The On And Ons from Australia are also back with the new record. Also from Australia, we have Last Leaves. Electric Six are back with the new album, and so is Van Morrison. Today’s show is dedicated to Fats Domino, who passed away on October 24th.

Today we start off with the brand new song from a really cool new record for Bash & Pop. Then we check out another cool song from a band that puts records much more frequently, Electric Six. 1-800-Band is a quartet that comes from Brooklyn – they hired legendary Mitch Easter to help them out with the new album entitled High Beams. We also introduce Rob Clarke and The Wooltones are from Liverpool, England and Kill West from Argentina. King Gizzard and the Lizard Wizard announced a new album that experiments with microtonal scales. Greg Stackhouse Prevost of The Chesterfield Kings is back with the new solo record. And we finish things off with the new album for Sloming Moops that just came out, entitled Dance Drool

Today we have some big bands that came up with new records recently. Nick Saloman’s Bevis Frond sounds strong on Example 22. Los Lobos rock out with some of the best tunes they made in their long career on Gates of Gold. Electric Six continue steady stream of annual records with Bitch Don’t Let Me Die and Eagles of Death Metal are back after seven years of silence with Zipper. Juliana Hatfiled had a record with her trio early this year, but also, four other ladies from Boston called Potty Mouth emerge greatly inspired by Juliana. Finally, our friends in Perth Australia, Zerodent, are trying to find home for some newly made recordings, and we sample one of the songs.

Faces – That’s All You Need;
Barreracudas – Backup Plan;
Zerodent – I Am Coming In;
Lemonheads – It’s About Time;
Juliana Hatfield Three – Ordinary Guy;
Potty Mouth – Creeper Weed;
Ben Vaughn – Then The North Wind Blew;
Bevis Frond – This One;
Bevis Frond – Backanile;
Electric Six – If U R Who U Say U R;
Mark Lanegan – Methamphetamine Blues;
Mark Lanegan – When It’s In You;
Eagles of Death Metal – I Love You All The Time;
Los Lobos – Gates of Gold;
Sonny Vincent – Don’t Tell Me (Live in CLE);
Trotsky Icepick – Boy With A Book;
Nikki Sudden – Such A Little Girl;
Sandy Denny And The Strawbs – All I Need Is You.

Today we continue listening to the Suicide Squeeze Records compilation with two new bands: four ladies in La Luz and Audacity from California. Out of Ireland comes Goodly Thousands. Terry Manning, legendary producer and engineer from Memphis, with a great solo album from 1969 recorded at Ardent is back with the new, low key album called Heaven Knows. And finally, Kim Fowley’s posthumous release Detroit Invasion is out. It was recorded three years before his death with the help of Matthew Smith from Outrageous Cherry, Johnny Nash from Electric Six and Troy Gregory in Detroit. What an incredible album!

We open up today with a tune from the brand new Electric Six record Human Zoo. Then we move on and check out new albums for two of the Sonic Youth guitarists which are out now, almost simultaneously. Thurston Moore made a really good one called The Best Day and Lee Ranaldo collected songs from his earlier solo albums and put them together in an acoustic setting. We also introduce three new names: Mitski from New York City, Fox and The Law from Settle and Meatbodies from Los Angeles.

We follow Laura Cantrell’s career since the inception of this show and she has a new record out called No Way There From Here. Another band that’s been with us since the first year of this show is Electric Six, although back then their name was Wild Bunch. We watched them go to the top and they have one record a year without breaks almost all the time. The new record is called Magnum. James Jackson Toth, aka Wooden Wand is also back with the new record backed by his band World War IV from Birmingham, AL. The most interesting novelty this time is a new singer songwriter from Melbourne, Australia. His name is Ben Mason. He re-recorded the Zombies classic The Odessey And Oracle and renamed it into The Odessey Odyssey. I think it’s an awesome idea to take one of the most intricate records and show that you are capable of repeating it note to note – it’s a great way to make people pay attention to your own work.

Today we say goodbye to one of my personal heros. Tusta was a singer of a great punk band KUD Idijoti who put out a series of three excellent EPs back when I was just starting to be interested in the underground rock. For me, Idijoti was one of the most exciting things that happened musically worldwide, although they were just a small local Yugoslav band. Unfortunately, cancer took Tusta’s life sometime last week and it shook me deeply. As if a family member died, although I didn’t even know him personally. Today show is for Tusta. We hear some his music and we also check out some of the new music as well. Cowbell is a duet from England. Electric Six have a new live record, and they visited Cleveland. Along, they brought a new band from San Diego called Little Hurricane, also a duet. And we saw an interesting new Cleveland band, Dead Sweaters. Plus Dick Valentine has a new solo record. And The Legs, Eric Oblivian’s old band, has their recordings from 2000 finally out on a record.

So, Beach Boys finished Smile… I don’t know exactly what to think of it. This album probably never even had a clear vision, and it’s unclear how you can complete it with chaotic pieces that the Boys recorded back in the day. Still, the concept behind it is so intriguing that it will hunt the rock’n’roll forever. It hunts me too. In this show, a portion of the playlist is delivered in Smile format, with a lot of cutting and pasting. Check it out from 14:28 to 28:16 in part 1. The rest of the show brings you new tunes from King Khan and Electric Six. We also have new names Jerusalem and the Starbaskets, Barrarecudas, and The Excitements. Giant Sand has a reissue of Chore of Enchantment and there’s a tribute out there for Ian Dury.

Another great news is that we’re now syndicating in Kragujevac again! The oldest and furthest reaching radio station over there, Radio Kragujevac on 94.7 MHz picked our show for their program and the scheduled times are Sundays from 4 to 5 pm and on Tuesday from 2 to 3 pm their time (CET). We’re glad to be back on air over there.

Today we have the most recent (and not so new) album by Electric Six and Jimi Hendrix “unreleased” compilation Valleys of Neptune. Cleveland band Easter Monkeys have recently published a compilation record entitled Splendor Of Sorrow Plus. And that song sets off a strange review of Cleveland underground from 80s till today: Resolvers and Scarcity of Tanks are at the Lighthouse for the first time. Check us out!