Last show of 2021! We check out new singles for Jenny Don’t and The Spurs, Eamon McGrath, The Strange (with Chris Eckman) and John Paul Keith. We also check out James McMurtry from Austin TX, Pilgrim from Tulsa, OK, Suicide Swans from Australia, all with new albums. And of course, the legendary Neil Young is also here with a track from his new record. We say goodbye to Michael Nesmith, a Monkee and a great songwriter who passed away this year, 10 days before his birthday. 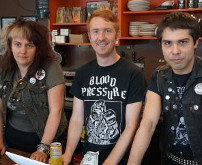 Oh! Episode 500 from Cleveland? That’s a lot when you think about it… But, let’s not worry too much about big round numbers and keep on keeping on. We have a new band from Chris Eckman of The Walkabouts, which he formed with Croatian musicians. It’s called The Strange. Jim Lauderdale is back with two new records. One is solo, and the other one is with buddy Roland White. The rest of the stuff today are all new names for us: The Coke Dares from Bloominton IN, Dark Thoughts from Philly, The Black Delta Movement over in Hull, UK and Chris Richards with his Subtractions over in Detroit. We also have Message, a band I know nothing about, but hopefully I find some info in the near future. Ruby Boots is in our Live in Cleveland segment.

Welcome to our first regular show in 2014. After several shows in which we had a year-end review, new records piled up so today’s show is filled with new stuff. We start off with the brand new tune for Games, who we just pronounced as the band with the best record in 2013. We also use this opportunity to learn about some previous bands for Jeremy and Dave in Games. Then we check out the new Apache tune. They have a new single. First Base come from Toronto and they just released a fun debut record on Hozac. We check them out as well. Then we have a relatively new tribute that Ben Deily and his Varsity Drag performed in honor of Wiz (ex Mega City Four and Ipanema). We continue with an exclusive new track from Sweet Apple which is scheduled to appear on their upcoming album Golden Age of Glitter. It sounds a bit like Suicide, so we check out another song that also sounds like Suicide, by a new band Dreamsalon from Seattle. Chris Eckman also has a new record called Harney County. We also check out Rainy Day Saints live in Cleveland. I read in Sanjin Strbac book Token For The Favorite Wurlitzer a quote from Zikica Simic that there’s not enough appreciation for blues these days. So I decided to feature one blues musician that I admire in each new show in alphabetical order. So, in our new regular segment Blues Alphabet, we hear Pink Anderson. Finally, we pay a special tribute to Dick Dodd (ex Standells) and Phil Everly, of The Everly Brothers. Both of them died recently.

Today’s spotlight is on the neo-acoustic music scene in former Yugoslavia. There was a huge folk movement also known over there as akusticari in the early to mid seventies. It seems as that scene is being revived. We already presented Belgrade’s On Tour some time ago, and today we have two more new names. Irena Å½iliÄ‡ is a young singer songwriter from Zagreb with her modern and fresh take on western folk music. Nina RomiÄ‡, also from Zagreb, is on the other hand more rooted in the local folklore. In this episode, she covers a song written originally by Satan Panonski – a hard blood shock punk from the eighties who was both influential and controversial at the same time. Nina’s cover is a part of a larger tribute called OÄi u magli. We also have a new album by our old friends from Rijeka My Buddy Moose. Their style is more on the roots rock side. Their new album Shine Shine Shine is produced by Chris Eckman from The Walkabouts, who also lives in that neck of the woods these days – Ljubljana. The Walkabouts have a live album called Berlin and we check that out as well in this show. Elsewhere form Europe, Amsterdam, we have an instrumental outfit called Bevel Emboss who create a wonderful tapestry of guitar sounds on their new album called Celluloid. Back to America – we have Arbouretum from Baltimore for the first time and super-group Sweet Apple have a new single out there which announces their album due this Spring around the Record Store Day. Mark Lanegan is a guest vocalist!

Folks, one of the weirdest episodes ever here at the Little Lighthouse… There is a whole bunch of reissues these days with live music. So, we started off with the new live reissues of Lou Reed, Rolling Stones and Giant Sand. Twilight Singers have a new live album out, so we check out that as well. Our good friend Damien Youth reissued his studio album Sunfield on vinyl. It’s a lovely double LP. And then we played the new band for Chris Eckman from Walkabouts, called The Frictions, which he put together over in Ljubljana where he lives these days. They played a cover of Suicide, so “naturally”, the rest of the songs were about suicide as an act, not as a band. So, very happy ending today… Check it out, but don’t do it.

Ladies night today! First 40 minutes is nothing but ladies… Carrie Brownstein and Janet Weiss from Sleater Kinney have a fresh, new band called Wild Flag. Self title album is out on Merge. Singer songwriters Pieta Brown and Ana Egge are also here with interesting albums. Egge’s new record is called Bad Blood and it’s apparently based around the mental problems that run in her family. The Walkabouts are also back after six years with the new record which they call Travels In The Dustland. Chris Eckman lives in Slovenia these days and he organized a very interesting tribute to Bob Dylan together with a group of local musicians. We represent this album today with Severa Gjurin and her version of Not Dark Yet from Bob’s later period. The show closes with two boys from across the pond. The new name for us is Danny George Wilson and his band The Champions of The World. Springsteen fans should pay attention. Laz McCluskey from Bubblegum Lemonade is working on the new record and testing the pulse of the audience by sharing some early demos. We check out one of those demos today.

And a bad news for last. Unfortunately, the way I understand, The Little Lighthouse will not be a part of the new Radio Centar 987 schedule in Kragujevac, but we’re still standing strong with Rock XS in Athens. If you are a program director of some radio station that would like to syndicate this podcast, you are very welcome to contact me about the terms.

Senka VeletanliÄ‡ – PonoÄ‡no sunce;
Wild Flag – Romance;
Pieta Brown – Blue Rider;
Pieta Brown – Other Way Around;
The Sundays – Here’s Where The Story Ends;
Severa Gjurin – Not Dark Yet;
The Walkabouts – Thin of the Air;
The Walkabouts – The Light Will Stay On;
Sandy Denny – Wretched Wilbur;
Ana Egge – Bad Blood;
Danny and The Champions of the World – Soul in the City;
Danny And The Champions of the World – Bluebird;
Sid Selvidge – Don’t Make Promises (You Can’t Keep);
The New Pornographers – Letter From an Occupant;
Bubblegum Lemonade – Have You Seen Faith;
Mikal Cronin – Again and Again.

Everybody already knows quite well that The Rolling Stones famous album Exile on Main Street has recently been reissued in a luxurious remastered new edition. It indeed sounds great, and much of today’s show is dedicated to this album. We also take some time to hear some new stuff. Super-trio Dirtmusic which consists of Chris Eckman, Hugo Race and Chris Brokaw has a second album called BKO. We also have a new name for the first time. His name is James Jackson Toth AKA Wooden Wand.

Hey hey! Welcome to the the very last Little Lighthouse for this summer. Radio SC, together with the college in Zagreb, are leaving for a collective summer vacation, and this program will also take a small break. In this show we have the brand new tunes for The New York Dolls and Petra Haden. Booker T. Jones recorded a brand new album with Drive By Truckers called Potato Hole. We check it out in this show. Chris Eckman of The Walkabouts also recorded a new album. It’s called The Last Side of The Mountain, it’s recorded in Slovenia and Steve Wynn is a guest on one tune.

When Chris Brokaw, Chris Eckman and Hugo Race decided to form a trio, their main objective is to learn from each other, share experiences as artists and musicians. As you can imagine, when you put three great authors together in an unusually creative situation, great things happen. The idea was to turn to conservatively traditional forms musically and expand them with touching and deeply personal experiences. And honestly, results are so strong that yours truly was driven to tears on track 10.